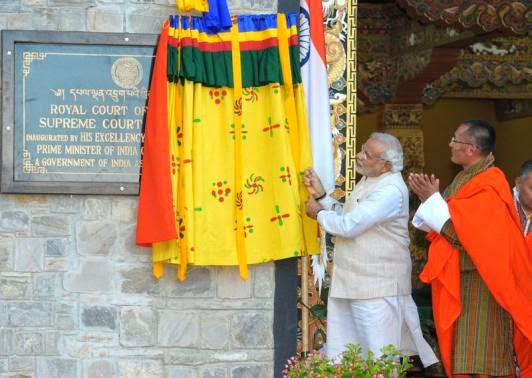 1 OF 3. Prime Minister Narendra Modi (L) unveils the plaque to inaugurate the Supreme Court of Bhutan as his Bhutanese counterpart Tshering Tobgay watches at Thimphu in Bhutan June 15, 2014.
Thimphu: Narendra Modi held talks in Bhutan on Sunday during his first foreign visit as prime minister, as he steps up a charm offensive with neighbours to try to check China’s regional influence. The Indian prime minister was greeted at the airport by Bhutanese counterpart Tshering Tobgay at the start of a two-day visit to the tiny Buddhist kingdom, a month after his landslide election victory. Tobgay later wrote on Twitter that he had “very good discussions” with Prime Minister Modi, who shared his “passion for education, development and environment”.
His decision to make tiny Bhutan his first destination was the latest in a series of unconventional policy choices by the new prime minister who came to power last month on the promise of making his country an economic and military power.
He previously invited South Asian leaders to his inauguration and has exchanged friendly letters with Pakistan's Prime Minister Nawaz Sharif in a bid to re-establish India as the dominant power in the region.
“He declared B4B: that Bharat (India) is there for Bhutan, ready to support in all our endeavours,” Tobgay said. Modi received a grand welcome with a ceremonial guard of honour, while schoolchildren in national dress lined the mountainous road between the airport in Paro and capital Thimphu and waved the two countries’ flags. Ahead of his visit, Modi had said that relations with Bhutan would be “a key foreign policy priority” of his government. “India and Bhutan enjoy a unique and special relationship...forged by ties of geography, history and culture,” Source REUTERS
June 15, 2014
Unknown
Feature, international, latest, News