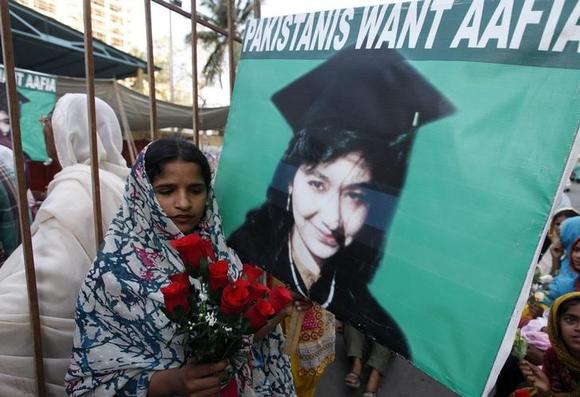 An Aafia Siddiqui supporter carries silk roses next to a poster during a celebration to mark Siddiqui's 41st birthday in Karachi March 2, 2014.
CREDIT: REUTERS/AKHTAR SOOMRO/FILES
(Reuters) - A Pakistan-born neuroscientist has become a rallying cry for militant groups demanding her release from a U.S. prison. But in a little-noticed move she is trying to abandon her legal fight for freedom, saying the U.S. court system is unjust.
Islamic militants in Syria, Algeria, Afghanistan and Pakistan have made Aafia Siddiqui's release a condition for freeing certain foreign hostages. Islamic State, for example, proposed swapping American journalist James Foley for her, but he was executed after their demands, which also included an end to U.S. airstrikes in Iraq, were not met.
A 42-year-old mother of three with degrees from the Massachusetts Institute of Technology and Brandeis University, Siddiqui is serving an 86-year sentence in a prison medical center in Texas. A jury in 2010 convicted her of attempting to shoot and kill a group of FBI agents, U.S. soldiers and interpreters who were about to interrogate her for alleged links to al Qaeda.
Siddiqui, who during her trial interrupted proceedings repeatedly and at times was removed from the courtroom, wrote U.S. District Judge Richard Berman in Manhattan on July 2 seeking to end her most recent appeal.
"I refuse to participate in this system of total injustice that has punished and tortured me repeatedly, and continues to do so, without my having committed a crime," she wrote.
Siddiqui said she wanted to be sent home to Pakistan through diplomacy, not through the legal system. But her lawyer Robert Boyle told the judge he was concerned she did not fully understand that as a consequence of her request she might not have another opportunity to challenge her conviction.
U.S. prosecutors were scheduled to respond to Siddiqui's letter with their own letter by late on Wednesday.
Siddiqui was likely unaware of the attempt by Islamic State to free her in a prisoner swap for Foley, Boyle told Reuters. Federal Medical Center Carswell severely restricts her contact with the outside world, he said.
Siddiqui already lost one appeal. In 2012, an appeals court rejected arguments that her trial was unfair and upheld her conviction.
Her latest appeal, filed in May, argues that Siddiqui received an unfair trial because she was not allowed to fire defense lawyers who were paid by the Pakistan government, and that U.S. prosecutors failed to turn over important evidence.
WIDESPREAD KIDNAPPINGS
In 2003, Siddiqui was wanted by the FBI for questioning for possible ties to al Qaeda and was detained by Pakistani authorities, according to U.S. media reports at the time.
U.S. officials alleged that when the Afghan police captured Siddiqui in July 2008, she was carrying two pounds (900 grams) of sodium cyanide, which releases a highly toxic gas, notes that referred to a mass casualty attack, and a list of U.S. landmarks.
Siddiqui was never charged with links to terrorism. The FBI agents, U.S. soldiers and interpreters said that as they were about to interrogate her at an Afghan police compound in Ghazni, Afghanistan, she grabbed a rifle and began shooting at them. None of them were wounded, but Siddiqui was shot in the abdomen when they returned fire.
Siddiqui's family says she was raped and tortured at the U.S. military's Bagram Air Base in Afghanistan. U.S. officials have said they found no evidence of that, but Islamist militant groups say her case is an example of the worst excesses of the U.S. war on terror.
At her trial, Siddiqui's lawyer urged an acquittal because there was no evidence the rifle had been fired. No bullets, shell casings or bullet debris were recovered and no bullet holes were detected, the lawyer said.
Prosecutors cited testimony from witnesses and said the witnesses had no motive to lie.
Freeing Siddiqui or winning her repatriation to Pakistan has at a times been a popular cause in her homeland, where her trial was seen as unfair. In 2011, Pakistan's Taliban claimed responsibility for the kidnapping of a Swiss couple and said they could be freed if Siddiqui were released. [ID:nL5N0F23US]
In Afghanistan, the Taliban asked for her release as part of a deal to free U.S. Army Sergeant Bowe Bergdahl. In May, Bergdahl was released in a prisoner swap that freed five Taliban leaders held at the prison at Guantanamo Bay, Cuba.
Calls for Siddiqui's release were made by al Qaeda-linked kidnappers in Algeria in January 2013. A few months later, two Czech women who had been kidnapped in Pakistan appeared in a video demanding the scientist's freedom in return for their release. It was not clear who was holding them.
(Additional reporting by Alistair Bell; Editing by Noeleen Walder and Ross Colvin, Courtsy by Reuters)
September 10, 2014
Unknown
article, international