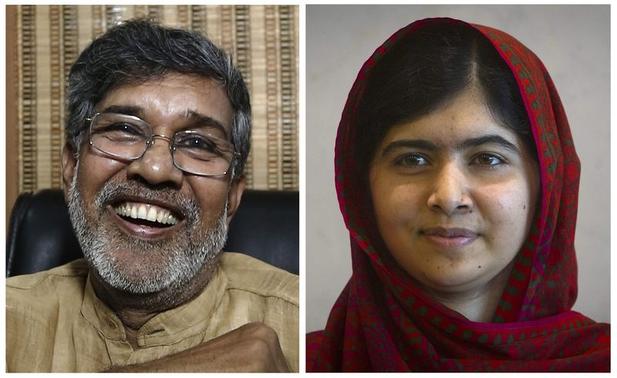 (Reuters) - Pakistani teenager Malala Yousafzai, who was shot in the head by the Taliban in 2012 for advocating girls' right to education, and Indian children's right activist Kailash Satyarthi won the 2014 Nobel Peace Prize on Friday.
Yousafzai, aged 17, becomes the youngest Nobel Prize winner by far.
Satyarthi, 60, and Yousafzai were picked for their struggle against the oppression of children and young people, and for the right of all children to education, the Norwegian Nobel Committee said.
The award was made at a time when hostilies have broken out between India and Pakistan along the border of the disputed, mainly Muslim region of Kashmir - the worst fighting between the nuclear-armed rivals in more than a decade.
"The Nobel Committee regards it as an important point for a Hindu and a Muslim, an Indian and a Pakistani, to join in a common struggle for education and against extremism," said Thorbjoern Jagland, the head of the Norwegian Nobel Committee.
Yousafzai was attacked in 2012 on a school bus in the Swat Valley in northwest Pakistan by masked gunmen as a punishment for a blog that she started writing for the BBC's Urdu service as an 11-year-old to campaign against the Taliban's efforts to deny women an education.
Unable to return to Pakistan after her recovery, Yousafzai moved to Britain, setting up the Malala Fund and supporting local education advocacy groups with a focus on Pakistan, Nigeria, Jordan, Syria and Kenya.
Satyarthi, who gave up a career as an electrical engineer in 1980 to campaign against child labour, has headed various forms of peaceful protests and demonstrations, focusing on the exploitation of children for financial gain.
"It's an honour to all those children still suffering in slavery, bonded labour and trafficking," Satyarthi told CNN-IBN after learning he won the prize.
In a recent editorial, Satyarthi said that data from non-government organizations indicated that child labourers could number 60 million in India or 6 percent of the total population.
"Children are employed not just because of parental poverty, illiteracy, ignorance, failure of development and education programmes, but quite essentially due to the fact that employers benefit immensely from child labour as children come across as the cheapest option, sometimes working even for free," he wrote.
Children are employed illegally and companies use the financial gain to bribe officials, creating a vicious cycle, he argued.
Yousafzai last year addressed the U.N. Youth Assembly in an event Secretary-General Ban Ki-moon called "Malala Day". This year she travelled to Nigeria to demand the release of 200 schoolgirls kidnapped by the Islamist group Boko Haram.
"To the girls of Nigeria and across Africa, and all over the world, I want to say: don't let anyone tell you that you are weaker than or less than anything," she said in a speech.
"You are not less than a boy," Yousafzai said. "You are not less than a child from a richer or more powerful country. You are the future of your country. You are going to build it strong. It is you who can lead the charge."
The prize, worth about $1.1 million, will be presented in Oslo on Dec. 10, the anniversary of the death of Swedish industrialist Alfred Nobel, who founded the award in his 1895 will.
The previous youngest winner was Australian-born British scientist Lawrence Bragg, who was 25 when he shared the Physics Prize with his father in 1915.
(Reporting by Balazs Koranyi, Gwladys Fouche, Terje Solsvik and Alister Doyle, Additional reporting by Douglas Busvine and John Chalmers; Editing by Angus MacSwan; Editing by Angus MacSwan)
Source: http://in.reuters.com/article/2014/10/10/nobel-prize-peace-idINKCN0HZ0NX20141010
October 10, 2014
Unknown
international, News