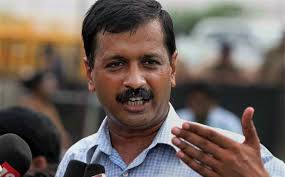 New Delhi (SAT): In a stern message to AAP MLA Somnath Bharti, Delhi Chief Minister Arvind Kejriwal on Wednesday said the legislator, who is on the run in a domestic violence case filed by his wife, is becoming an embarrassment to the party and he should surrender and cooperate with the police.
Breaking his silence on the row involving his former ministerial colleague, the AAP chief questioned Bharti's act of going into hiding and asked why he was running away from the police and scared of going to jail.
He should cooperate with police," Kejriwal said in his tweets referring to Bharti, who was the Law Minister during the 49-day stint of AAP government in 2013.
The Delhi High Court on Tuesday dismissed the anticipatory bail plea of Bharti in a domestic violence case filed by his wife Lipika Mitra. The court said Bharti was "not only violent and outrageous at home, but also before the public at large".
Last week, a local court rejected his anticipatory bail in the same case. The party's top brass had then expressed its displeasure over his disappearance and asked him to cooperate with the police.
The party has been taking the stand that the Delhi Police has been targeting it. However, Bharti's act of going into hiding has not gone well with party leadership.
AAP leader Ashutosh on Wednesday said while police has been "unnecessarily showing a lot of interest" in the case, Bharti should "surrender and present his side of the story".
"The High Court has rejected his bail... he should come out in open and present his case before the investigating agency. There is no point in running away from the law.. we have respect for the law, we have respect for the courts and we believe that justice will be done," he said.
Somnath's wife thanks Kejriwal
A "surprised" Lipika Mitra thanked Delhi Chief Minister Arvind Kejriwal for asking her husband and AAP MLA Somnath Bharti to "surrender" in a case of attempt to murder and domestic violence filed by her.
Police teams are looking for Malviya Nagar MLA Bharti since Tuesday after the Delhi High Court rejected his anticipatory bail in the case.
"It's good that the Chief Minister has finally spoken out albeit after taking so much time. I am grateful to him," Mitra said.
Expressing her surprise over Kejriwal's stand, she wondered why AAP made Bharti speak on a issue like 'women empowerment' during a one-day special session of the Delhi Assembly in August.
"Considering they were defending him and made him speak on such issues I am definitely surprised that the Chief Minister has taken this stand...He should act as a CM first and friend later," she said.
On being told that Bharti was avoiding arrest as he may appeal in the Supreme Court, Mitra said, "Whoever is advising him is definitely not his well-wisher."
"Delhi Police is doing what it can. He should come out and cooperate with police," she said.
(With Agency inputs)
September 23, 2015
Unknown
News, regional