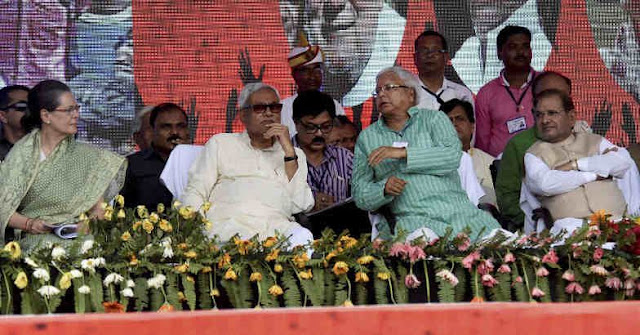 Patna (By Sat Staff): Bihar Chief Minister Nitish Kumar on Wednesday named 242 candidates of his alliance for Assembly polls, with a major chunk from SC/ST and backward communities, and launched a blistering attack on BJP alleging it was "anti- reservation" and cannot but toe the line of RSS which is "like its Supreme Court".
Releasing the joint list of JD(U), RJD and Congress candidates of the grand alliance, he said it represents all sections of society with 16 per cent from general category, 55 per cent backwards, 15 per cent SCs/STs and 14 per cent from the minority community.
Kumar claimed the coalition stood united as there were no differences unlike in the NDA and said the people of Bihar will give a befitting reply to the BJP as they were watching its "divisive" politics.
Hitting out at BJP and RSS, he accused them of being against reservations and said the RSS, which was the ideological mentor of BJP, was seeking to install an "extra-constitutional" body to review reservations.
"It is clear that he (Bhagwat) feels the current policy of reservation is not right and wants some other system," he said, while reading out excerpts of the RSS chief's interview to RSS mouthpiece 'Organiser' and 'Panchjanya'.
"Any amendment in Constitution can be done in Parliament. They want somebody other than the Constitution, an extra-constitutional authority, which should look into who should get reservation and how long.
"Not in the Constitution or in Parliament but in the hands of the elite committee. It is a very dangerous view. It cannot be accepted," he said.
Questioning BJP's stand on reservation, he said whatever the ruling party may say it cannot go against the views of the RSS.
"The BJP has a government at the Centre, which has repeatedly claimed that they are proud to be Swayamsevaks.
"RSS view is final. Whatever BJP might say, it has no meaning. Like anything is decided by the Constitutional bench of the Supreme Court, it is final and there is nothing after that. The same way in RSS, if RSS chief says something then BJP has no say.
"The BJP is a political outfit of RSS and Swayamsevaks and pracharaks are part of this government. Whatever Bhagwat has said is final and there is no other thought," he said, charging the BJP with being against reservations.
The Bihar chief minister said development will be the main poll plank of the alliance and took a dig at the NDA coalition where differences among alliance partners were out in the open.
"It is an internal matter of BJP and we have nothing to say on this. People are watching BJP's politics and will give a reply," he said.
Wednesday is the last day for filing nominations for the first phase of polls to be held on October 12.
(With Agency inputs)
September 23, 2015
Unknown
News, regional