WHO warns of cholera threat in Bangladesh Rohingya camps 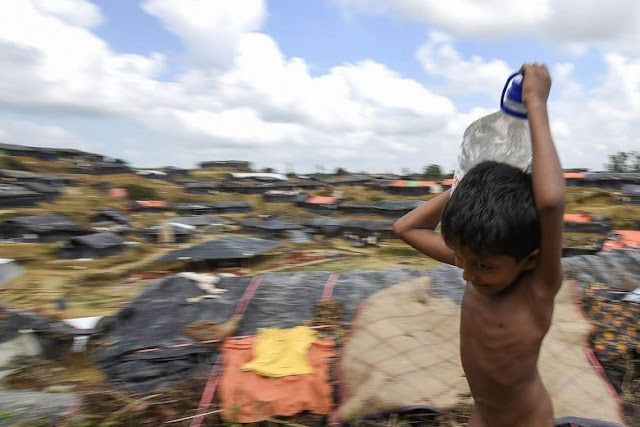 A young Rohingya refugee carrying water at the Balukhali refugee camp in Ukhia, on Sept 22, 2017.PHOTO: AFP
COX'S BAZAR, BANGLADESH (AFP) - The World Health Organisation (WHO) warned on Monday (Sept 25) of a growing cholera risk in the makeshift refugee camps in Bangladesh where more than 435,000 Rohingya Muslims have sought shelter from unrest in Myanmar.
A month after the exodus began, those dispersed in some 68 camps and settlements along the border do not have safe drinking water and hygiene facilities, according to the WHO.
The camps also face dire shortages of food and medicine in what has quickly become one of the world's largest refugee settlements.
"Risk of water borne diseases is high, especially (as) there is a very high risk of cholera and this is why everyone is concerned," the WHO said in a statement. "Interventions are being scaled-up, however, the situation remains critical and challenging."
The latest influx has overwhelmed the camps around Cox's Bazar, which previously housed at least 300,000 people who had fled earlier violence in Myanmar's Rakhine state.
The WHO says mobile medical centres have been set up, while Bangladesh health authorities say they have treated some 4,500 Rohingya for diarrhoea in a month and vaccinated some 80,000 children for measles and polio.
"We are trying our best to face the challenges. But we are concerned," Enayet Hossain, deputy head of Bangladesh's health services department, told AFP.
The department said that at least 10 Rohingya have died in Bangladesh since the influx, most from bullet and blast wounds suffered in Rakhine.
Two elderly Rohingya men died of diarrhoea at a charity clinic more than a week ago, said Misbah Uddin Ahmed, a health department official at Ukhia, where most of the camps are located.
"They were also suffering from old age complications and gastroenteritis," he told AFP.
Two Rohingya women, aged 50 and 60, were shifted to a hospital in the port city of Chittagong after they were diagnosed with HIV, police said.
Ahmed said specialists from Bangladesh's International Centre for Diarrhoeal Disease Research (ICDDRB) and government scientists had visited camps to take samples.
"They are going to set up two field stations here," he told AFP.
'SITUATION UNDER CONTROL'
The Doctors Without Borders (MSF) group said last week the camps were on the brink of a public health disaster as filthy water and faeces flow through shanties.
It said a "massive scale-up of humanitarian aid" was needed, with adults on the cusp of dying from dehydration.
But Ahmed said the situation was improving as hundreds of latrines and tube-wells were being dug by government services and local charities.
The army, which has taken over aid management, says it has made sanitary facilities the "highest priority" in an effort to stave off a health emergency. "The situation is still under control," Ahmed said.
More than 436,000 refugees have crossed the border from Rakhine since Aug 25 when a military crackdown was launched following attacks by Rohingya militants, according to UN figures on Monday.
The refugees have given shocking accounts of killings and mass rapes by Myanmar soldiers and Buddhist mobs. The Myanmar military says they have only targeted Rohingya militants.
September 26, 2017
Unknown
international, News