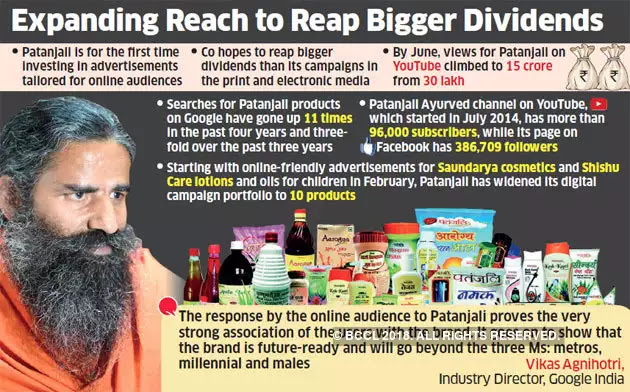 NEW DELHI: Patanjali Ayurved Ltd., the herbal products manufacturer founded by yoga guru Baba Ramdev, is going digital big time. In collaboration with Google and Facebook, Patanjali is for the first time investing in advertisements tailored for online audiences, hoping to reap bigger dividends than its campaigns in the print and electronic media

“We began in February and the response has been far more than our expectations,” said a senior official at Patanjali, requesting anonymity. “Within five months, Patanjali has become the most popular FMCG brand and the fifth most sought after brand online.”

“The response by the online audience to Patanjali proves the very strong association of the users with the brand. It goes on to show that the brand is future-ready and will go beyond the three Ms: metros, millennial and males,” said Vikas Agnihotri, industry director at Google India.


The other online platform where Patanjali fared well is Facebook. Much to its own surprise, Patanjali claims to have connected well with the youth online. “More than 80% of the favourable response we have received is from the youth in Karnataka, Orissa and Punjab,” said Santosh Kumar, CEO of MangoData, the company’s digital agency.

Reducing the usual 30-second ad duration to six seconds for the Facebook audience and holding live interaction with audiences during product promotions have earned Patanjali a positive buying response, according to Kumar. The Patanjali Ayurved channel on YouTube, which started in July 2014, has more than 96,000 subscribers, while its page on Facebook has 386,709 followers.

“Within five months of its debut, Patanjali has seen a significant ramp-up in its online presence,” said Sandeep Bhushan, director for consumer and media at Facebook India. “Unlike other online platforms, Facebook consumers get to make the choice of how deep they want to go into the content. Patanjali has a range of products across generations.”

Google and Facebook have chalked out a plan to take the company to untapped customers. Starting with the southern states, Patanjali has created an advertising narrative in local languages for Andhra Pradesh, Kerala, Tamil Nadu, Karnataka and Telangana. “By identifying the right demographic and location for any brand, Facebook is able to target specifically on the right audience,” said Bhushan.

Patanjali is also campaigning online for a boycott of foreign products, in sync with the “Go Swadeshi” movement initiated by founder Baba Ramdev, who doubles up as its brand ambassador.

In the run-up to Independence Day, Ramdev, who has more than 8.6 million followers on Facebook, will reach out to Patanjali’s online audience and ask them to shun the offerings of foreign companies and encourage the use of swadeshi products. Special digital content and advertisements are being created for social platforms to encourage people to “pledge” the boycott of products of foreign companies.

Starting with online-friendly advertisements for Saundarya cosmetics and Shishu Care lotions and oils for children in February, Patanjali has widened its digital campaign portfolio to 10 products.

“Patanjali offers a massive product range and a seamless experience is created for the right audience by choosing the right product and creating the right message for it,” said Agnihotri of Google.

The company clocked a turnover of Rs 10,561crore in financial year 2016-17 and plans to double that figure in this financial year to Rs 21,000 crore on the back of growing sales, customer loyalty and new manufacturing plants.