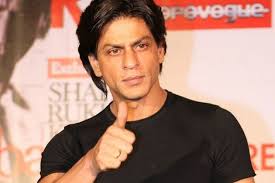 Superstar Shah Rukh Khan returned to the small screen with a bang - he will host "India Poochega - SabseShaanaKaun", a game show adapted from the "Who's Asking?" international format.
The show will air on &TV, a new Hindi general entertainment channel launched by Zee Entertainment Enterprise Limited (ZEEL) on Wednesday night here.
Looking his charming self, Shah Rukh took mediapersons present at the launch through the show's format.
He said: "I like the question and answer format. I do that with my children and family. This show will deal with questions that have been asked by common man and will be answered by the common man himself to win the prize money.
"The questions will be those which people think are easy to answer or sometimes don't even think about it. Many people have different questions to ask. I will just make sure the show has a lot of fun."
The 49-year-old, who sported a dapper, clean-shaven look in a formal blue suit, ensured the audience had a taste of the entertainment in store from the show, at the launch itself. His sense of humour and one-liners did the trick.
Shah Rukh even gave a glimpse into the show's format by playing it live with mediapersons.
"India Poochega - Sabse Shaana Kaun" is produced by Big Synergy and will be aired on &TV in March.
The 49-year-old, who started his showbiz career from TV itself -- via fiction shows like 'Fauji' and 'Circus', has previously hosted reality shows like "Kaun Banega Crorepati", "Kya Aap Paanchvi Paas Se Tez Hain" and "Zor Ka Jhatka". He was also seen as a judge on "Dil Se Naachein Indiawaale", which was brought to TV for the promotion of his film "Happy New Year" last year.
Asked how it feels to be back on TV after becoming the most loved Bollywood actor around the globe, SRK said: "The television industry and film industry understand each other and they work in synergy. I started with TV, but I haven't given such a brilliant performance so far.
"So, I would want to give back to TV. I feel this show will help me in achieving that."
He also feels that the only reason he has been away from TV for sometime is because he likes to work with those who are like family to him.
"I always wait for something like this. I am little spoilt as an actor and as a performer. I like to work with people who are family and take my little bit of unprofessionalism," he quipped.
"I didn't get anything interesting till this show, and also, I was too busy with other projects," he added.
While Shah Rukh was on stage, one scribe asked him who according to him is the most "shaana" (streetsmart) actor or actress.
He smiled and answered, "If I will tell any name, you will make an entire show on that, so let's just skip that."
Apart from roping in King Khan for its game show, &TV has also come up with line-up of other shows like "Razia Sultana, "Begusarai", "Bhabi Ji Ghar Par Hai!a and "Badii Devrani".
"Begusarai" is set in the hinterland of Bihar and has been produced by Saregama Productions. The channel has roped in filmmaker Tigmanshu Dhulia to design the first look of the show.
"Razi Sultan" on the other hand is an untold story of the 13th century. It is produced by Swastik Productions.
"Bhabiji..." will bring in the life of lively lanes of Kanpur and will share the journey of two neighbouring couples, whereas "Badiia" will bring out the essence of relationships.
Not only shows, &TVA has also come up with the soulful rendition of "Jashn jeena ka" that has been conceptualised and created by music duo Sachin-Jigar.
"&TV will offer a more substantial viewing experience to an audience that is always seeking fresh and relevant content. The channel extends our Hindi entertainment portfolio under the '&' bouquet and will add to the consolidation of our leading position in the entertainment industry," said Punit Goenka, managing director and CEO, Zee.
January 23, 2015
Unknown
Entertainment, News