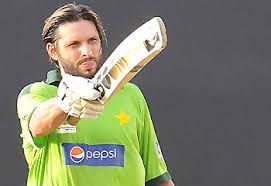 Pakistan all-rounder Shahid Afridi has said that he would like to reclaim the tag of being the fastest to score a ton in One-Day International (ODI) cricket. The 34-year-old’s record for the fastest ODI hundred was overtaken by Corey Anderson last January when the New Zealand left-hander smashed a 36-ball century against the West Indies in Queenstown. That record was once again beaten by a breathtaking display by AB de Villiers last Sunday when the Proteas captain blasted a hundred off 31 balls versus the same opposition at the Wanderers in Johannesburg.
Afridi, who is set to retire from the 50-over format of the game after World Cup, further said that one can't plan too much while setting these records and if it's your day, they will happen. He also praised de Villiers for his spectacular knock on Sunday.
“He played like a champion to get the record and it was his special day,” Afridi said in an interview.
"You never plan out to set such records. It just happens when you have a very special day and your confidence is sky high. If everything works out for me and it is my special day then I will try to improve the record set by Ab de Villiers in New Zealand or in the World Cup,” he added.
It was my day at Nairobi: Afridi
Talking about his own hundred against Kenya in Nairobi in 1996, Afridi said that everything he did on the day came off spectacularly and that he hopes to play a similar kind of innings despite batting at No.6 in the batting order before he retires.
"It just happened that day it was my special day and everything clicked. I hope I get another special day in the coming World Cup if it can happen I will try to get back the record of which I was always proud.
"But realistically speaking I know that at the number I come to bat at these days one can score a half century but it is really difficult to get a hundred but you never know it could my special day," he said.
ODI rules heavily loaded in the favour of batsmen: Afridi
The Pakistani also felt that with the rules in the limited-overs format being heavily loaded in favour of the batsmen, the day isn’t far when totals in the range of 350-400 will be chased down by the team batting second.
"After the rule changes in 50 overs cricket and with the popularity of T20 cricket things are now tilted in the favor of batsmen and in coming days we could see even totals of 400 go down easily,” he said.
"Limited overs cricket has really changed dramatically in the last couple of years."
Originally published on Sportskeeda.com here
January 23, 2015
Unknown
News, sports