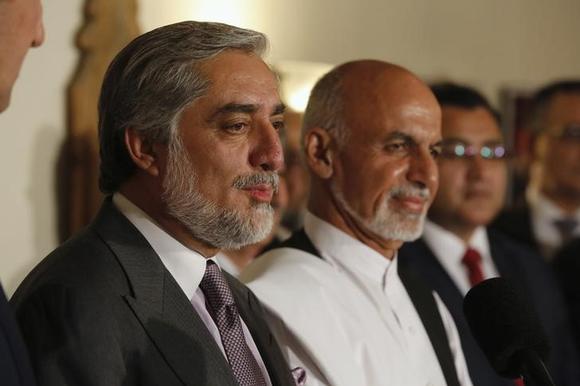 Afghanistan's presidential candidate Abdullah Abdullah (L) addresses a news conference with rival Ashraf Ghani (R) at this side as they announced a deal for the auditing of all Afghan election votes at the United Nations Compound in Kabul, late July 12, 2014.
CREDIT: REUTERS/JIM BOURG/FILES
BY HAMID SHALIZI AND JESSICA DONATI (Reuters) - Afghanistan's disputed presidential election veered further off course on Wednesday after both candidates withdrew their observers from a U.N.-supervised audit of votes that was meant to resolve the crisis. The crisis over the outcome of the vote has raised the spectre of instability, turmoil and perhaps even another round of fighting in a country already battling a potent Taliban insurgency. The audit was part of a U.S.-brokered deal to defuse escalating tension between rivals Abdullah Abdullah and Ashraf Ghani, who have both claimed victory in the ballot intended to mark the country's first democratic transfer of power. "We boycotted the audit process today because it is worthless for us. Let them carry on," Fazel Ahmad Manawi, Abdullah's chief auditor, told Reuters early on Wednesday. A few hours later, the United Nations asked Ghani's team to withdraw its observers in the interests of fairness and it had agreed, according to a team member, who said the withdrawal was unfair but prudent. "Today we requested the team of Dr. Ghani to review whether they should participate actively in the process," U.N. deputy chief Nicholas Haysom told reporters on Wednesday. "Underlying this request was a realization that the audit must not only have integrity, it must be seen to be even-handed by all Afghans," he said. After a pause on Wednesday morning, the audit resumed in the afternoon, Haysom said, adding he did not expect significant further delays as the audit proceeded without the physical presence of representatives from candidates' teams. "We continue to urge the return of both candidates to full participation in the process, and we stand ready to address their concerns whether they return or not," he said. Officials involved in the process say it is likely Ghani would eventually be confirmed president. U.S. Secretary of State John Kerry has twice flown to Afghanistan since a June 14 run-off vote to defuse tension and push the rivals to agree to cooperate. U.S. officials stepped in again earlier on Wednesday and held emergency talks with Abdullah, according to a member of his team. If the rival politicians needed a reminder of the militant threat, Afghan security forces were battling the Taliban for control of the northern province of Kunduz on Wednesday with heavy clashes also reported in parts of the south. The political crisis and fighting comes at a time of deep anxiety in Afghanistan as the United States, Kabul's biggest aid donor, and other NATO nations withdraw their troops after nearly 13 years of fighting Taliban insurgents. Chaos as Western forces pull out would be a huge embarrassment for those countries which have spent billions of dollars and lost about 3,500 soldiers in a bid to bring peace and stability. 'NO LEGITIMACY' Abdullah, a former foreign minister, won a first round vote in April but without a majority needed for outright victory, while preliminary figures showed Ghani, a former finance minister, won the run-off by more than a million votes. But Abdullah complained of rigging and demanded a recount in which fraudulent votes would be thrown out. Abdullah's team believe that the more fraudulent votes are thrown out, the better his chances will be of victory but they have complained that the rules of the audit are not strict enough to weed out the invalid ballots. On Tuesday, Abdullah's team said the United Nations had until Wednesday to accept its demands to tighten the rules for identifying and discarding ballots deemed fraudulent, or else it would drop out of the electoral process. Outgoing President Hamid Karzai, who is not allowed by the constitution to run again, has urged both candidates to respect the terms of the U.S.-brokered deal. Officials and diplomats fear a breakdown between the candidates and the power-brokers who have a stake in the process could trigger conflict along ethnic lines. Former finance minister Ghani is a member of Afghanistan's biggest ethnic group, the Pashtuns, who make up of most the population in the south and east. Abdullah, is part Pashtun and part ethnic Tajik but draws his support from Tajiks and other smaller minorities, largely in the centre and north. "More than a million votes are fraudulent," Mohammad Mohaqeq a leader of the Hazara minority and one of Abdullah's vice presidential running mates, told Reuters. "If these votes are not invalidated, we will never accept any outcome and it will have no legitimacy." (Additional reporting by Krista Mahr; Editing by Jeremy Laurence and Ralph Boulton) Source: Reuters
August 28, 2014
Unknown
international, News