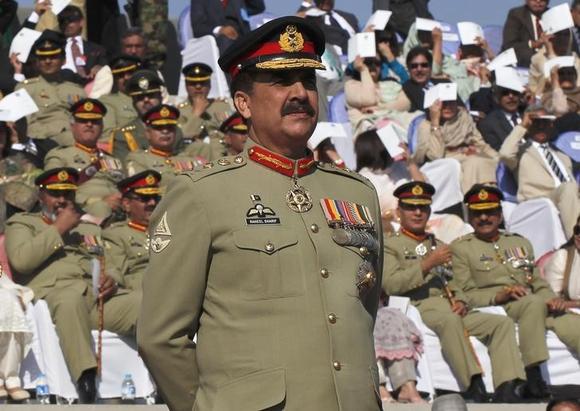 Pakistan's newly appointed army chief General Raheel Sharif attends the change of command ceremony in with outgoing army chief General Ashfaq Kayani (not in picture) at army headquarters in Rawalpindi November 29, 2013.
CREDIT: REUTERS/MIAN KHURSHEED/FILES
Pakistan's prime minister, weakened by weeks of opposition protests calling for him to resign, distanced himself from an army move to intervene in the crisis on Friday, saying he was not turning to the military for help to defuse the stand-off.
But in an embarrassing twist for Prime Minister Nawaz Sharif, the army quickly denied this, saying it had been specifically instructed by the government to step in to help mediate with the opposition.
Despite the army's intervention, the crisis appeared far from being resolved, with thousands of protesters still massing outside key government installations in centrail Islamabad late on Friday demanding Sharif's resignation.
Sharif's efforts to end the conflict have failed in recent days, undermining his clout in a country prone to army coups.
The protests have been led by opposition leaders Imran Khan, a hero cricket player turned politician, and Tahir ul-Qadri, a firebrand cleric, who have both announced they would now directly negotiate with army chief General Raheel Sharif.
Sharif has emerged much weakened from the crisis, his already uneasy relationship with the military hitting new lows. He was toppled in a military coup in 1999 during a previous stint in office.
Addressing parliament on Friday, Sharif said he had nothing to do with the army's decision to step into the conflict.
"The army did not ask to play the role of mediator, neither have we requested them to play such a role," he told the assembly where he enjoys a strong majority.
Sharif added that he had not objected to both Khan and Qadri meeting the army chief. "If ... they want to meet the army chief then they should certainly meet," he said.
However, the army's press wing tweeted afterwards: "(The army chief) was asked by the Govt to play facilitative role for resolution of current impasse, in yesterday's meeting, at (Sharif's) House."
The army's intervention late on Thursday heralded hopes that the crisis would soon be over, but as of Friday night, protest leaders showed no signs of abandoning their call for Sharif to resign, with Khan announcing he would organise more protests around the country.
"I am fighting a war," Khan told supporters. "I don't trust Nawaz (Sharif). He is a liar and he is not true to his words."
Officials in Sharif's camp have accused the army of backing the protesters, though the army has so far been expressly neutral.
Pakistan has been gripped by mass protests for more than two weeks, with thousands of protesters occupying the centre of the capital. Late on Friday night, up to 8,000 protesters, some armed with clubs and shouting slogans, had again gathered outside parliament, with police on standby to prevent any trouble.
Pakistan, a nuclear-armed nation of 180 million, has been ruled by the military for half of its entire history and has repeatedly oscillated between civilian and military rule.
ARMY'S ROLE
Although the army's role is key to how the crisis unfolds, few believe the army is bent on seizing power again.
Nevertheless, its public intervention has demonstrated just how fragile Pakistan's democracy still is more than a year since Sharif swept to office in the country's first democratic transition of power.
"This is the end of democracy, the constitution and supremacy of the parliament in the country," retired Justice Tariq Mehmood was quoted as saying by the respected Dawn daily.
Sharif has displeased the army by trying to strengthen civilian rule and improve relations with India and Afghanistan, and the latest conflict has given the military an opportunity to sideline him on security and foreign policy issues.
Sharif also angered the military by putting the former army chief, Pervez Musharraf, on trial for treason. Musharraf ousted Sharif in the 1999 coup.
The army's involvement is likely to unnerve some Pakistanis but it also offers Khan and Qadri a face-saving solution to end their deadlocked protest as both are seen as close to the military.
In a bid to appease the protesters on Thursday, the authorities registered a murder case to investigate the killing of 14 Qadri supporters during clashes with police at a protest in the city of Lahore in June.
The legal case names Sharif and his powerful brother Shahbaz Sharif -- Punjab's chief minister -- among those responsible. Although it is not a legal indictment, the move could lead to Shahbaz's resignation and put further pressure on the prime minister.
(Writing by Maria Golovnina; Editing by Robert Birsel,Credit: Reuters)
August 30, 2014
Unknown
international, News