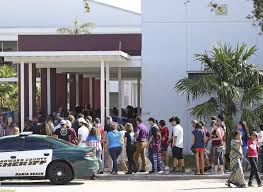 Washington, Feb 26 (AFP) Students and teachers returned to a Florida school for the first time since 17 people were killed there, consoling each other even as they called for swift action to address gun violence.

"Imagine (being) in a plane crash and then having to get on the same plane every day and fly somewhere else -- it's never going to be the same," David Hogg, a survivor of the February 14 shooting at a Parkland, Florida high school, told ABC television's "This Week."

The school held a voluntary "orientation" Sunday, with teachers and staff due back starting Monday and classes resuming on Wednesday -- a prospect described as "daunting" and "scary," but which is also a step for survivors to move forward after the attack.

One teacher who had already been back told NPR radio that the shock of returning to a classroom left exactly as it had been during the attack -- notebooks still on desks, the calendar still set to February 14 -- made her so physically ill she had to leave.

But Cameron Kasky, a student who survived the attack, tweeted a picture of people on campus, saying: "It is GOOD TO BE HOME."

"I have all my friends here with me and it just makes me feel like I'm not alone in this situation," student Michelle Dittmeier, who attended the orientation, told ABC.

Amid ardent demands by students like Hogg for action, President Donald Trump has said he is open to raising the minimum age for gun purchases and to banning so-called bump stocks, which can effectively convert semi-automatic weapons into automatic firearms.

Speaking at the Governors Ball ahead of meetings with the top officials from all 50 states on Monday, Trump said that school safety is a top priority: "I think we'll make that first on our list."

A new CNN poll, conducted a week after the Florida shooting, shows surging public support for stricter gun laws -- surpassing levels seen even after other horrific shootings of recent years -- and for a ban on powerful semi-automatic weapons like the AR-15 used in Parkland.

Overall, 70 percent of those surveyed said they supported stricter gun laws, up from 52 percent in October, and 57 percent favored a ban on semi-automatic arms, an increase from 49 per cent.

Florida Governor Rick Scott has laid out a plan to station a police officer at every public school in the state, raise the legal age for gun purchases from 18 to 21 and pass a "red flag" law for authorities to more easily remove guns from the mentally ill or people with violent histories.

The age change and "red flag" law are staunchly opposed by the influential National Rifle Association, of which Scott is a member.

Scott, who holds the NRA's highest rating of A+, noted on "Fox News Sunday" that "there will be some that disagree. But... I want my state to be safe."

Trump had Scott stand up to applause on Sunday, telling him: "You're doing a great job."

Florida was also the scene of a June 2016 shooting at an Orlando nightclub that left 49 people dead.
February 25, 2018
parikalpnaa
international, News