Home » national » News » Get back Nirav while returning from Abroad, Rahul tells PM.

Get back Nirav while returning from Abroad, Rahul tells PM. 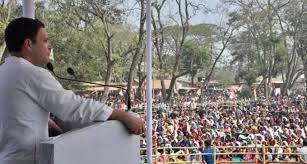 Mendipathar (IANS): Taking a dig at Prime Minister Narendra Modi, Congress President Rahul Gandhi on Tuesday asked him to bring back absconding diamantaire Nirav Modi "when he returns from his foreign trips". "I would like to request this Modi (Prime Minister), on behalf of all of us, to bring back the other (Nirav) Modi when he goes on another of his many foreign trips.

We will all be very grateful as a nation to get our hard-earned money back," the Congress chief said while launching the second leg of his campaign ahead of the February 27 Meghalaya Assembly elections. Gandhi also drew a comparison between the Prime Minister and Nirav. "... Nirav Modi sold diamonds, which are the stuff he claims dreams are made of. In fact, one can say he sold dreams to many people, including the government which happily slept while (Nirav) Modi ran away with the public's hard-earned money," he said. "A few years ago, another (Prime Minister) Modi also sold dreams to the people of India.

Dreams of 'achche din', Rs 15 lakh in everyone's bank account, two crore jobs, and so on," the Congress leader said. Gandhi noted that people had reposed faith in Narendra Modi and the Bharatiya Janata Party ahead of the 2014 Lok Sabha elections because of their grand promises, thinking that Modi would give them jobs. "Farmers thought their hard work would be respected and their produce get a fair price; tribals felt they would also get equal share and their land, traditions, and culture would be protected."

"But as this government's tenure nears an end," Gandhi said, "it is clear that instead of giving hope, security and economic growth they have dealt us only hopelessness, unemployment, fear, hatred and violence. "And with (liquor baron) Vijay Mallya and Nirav Modi scams we know this is a government that not only cannot remove corruption but is also actively participating in it."

Appealing to the 18.31 lakh electorate in Meghalaya not to vote for the National People's Party (NPP) headed by Lok Sabha member Conrad Sangma, the Congress chief claimed the NPP is "working to become the B-team of BJP". "Don't fall in the trap of NPP," he said, as he reminded people how the NPP is a coalition partner in the BJP-led government in Manipur.

"They are running a government in Manipur with the BJP, which the BJP formed through ill-gotten money and power. Today, I promise you that we will not allow a repetition of Manipur in Meghalaya. On behalf of the Congress I assure you this," he said. Voicing confidence that the Congress will retain power in Meghalaya, Gandhi said the Congress will unite each and every voice in Meghalaya that calls for justice.

Praising Chief Minister Mukul Sangma for what he said was ushering in an era of unprecedented growth and prosperity, the Congress chief said: "You have one of the most hardworking Chief Ministers in the country. Everyone can see the tremendous development here. Gone are the days of bandhs, strikes and violent activities."
February 20, 2018
Unknown
national, News