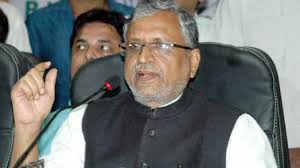 Patna, Feb 22 (PTI) Bihar Deputy Chief Minister Sushil Kumar Modi today lambasted RJD leader Tejashwi Yadav, terming his state-wide "Nyay Yatra" as a flop and charging him with making "absurd statements to gain sympathy". The senior BJP leader was responding to allegations by Yadav, the leader of the opposition in the state assembly, that the Nitish Kumar government was getting his phones tapped and attempts had been made to lace his food with poisonous and narcotic substances. "Who would dare to touch a person whose elder brother had the temerity to threaten that the Prime Minister would be skinned", Sushil remarked sarcastically in a tweet.

The Bihar Deputy CM was referring to the outbursts of Tej Pratap Yadav, Tejashwi's elder brother, who had said in November last year that Prime Minister Narendra Modi would be skinned if his father and RJD supremo Lalu Prasad suffered any physical harm after downgrading of security cover. "It is a family which remained in power for 15 years, recalling which people of Bihar still shudder. Whom do people, who became MLAs and ministers by virtue of the family's dynasty politics, fear for their lives", Sushil added. After the Grand Alliance's victory in the 2015 assembly polls in Bihar, Tejashwi Yadav had become the Deputy CM while Tej Pratap was made the health minister. The two brothers had made successful electoral debut in the polls.

Chief Minister Nitish Kumar walked out of the alliance last year following corruption cases against Tejashwi Yadav and formed a new government with the BJP. "People are making absurd statements to gain sympathy after the Nyay Yatra has turned out to be a flop", Sushil Modi said in response to Tejashwi Yadav's allegation yesterday that the Nitish Kumar government had hatched a "serious conspiracy" to derail his state-wide tour.

In an obvious dig at Tej Pratap's statement that Nitish and Sushil had "let loose ghosts" inside the bungalow allotted to him while he was the health minister, the Deputy CM said "Nitish Kumar had, six months ago, showed the maha bhoots (big ghosts) their place. They had been misusing their political position to grab land and build malls, flats and farm houses". The entire family of Lalu Prasad is facing probe by the CBI and the Enforcement Directorate in cases relating to money laundering and benami land transactions.

"Ghosts would soon be driven away from all government bungalows", Sushil said in an obvious reference to Tejashwi Yadav who is yet to vacate the bungalow allotted to him, adjacent to the CM's official residence, while he was the Deputy Chief Minister.
February 23, 2018
Unknown
national, News