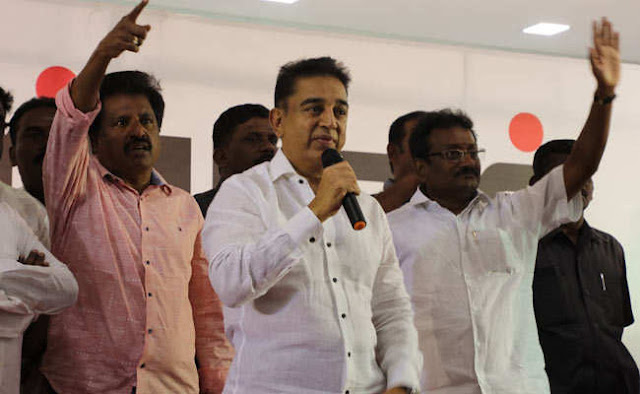 Chennai (PNS): Tamil Nadu is set to see the birth of yet another political ‘star’ and a star-led party on Wednesday when matinee idol Kamal Haasan would declare the name and programme of the political outfit which he is launching. As a prelude to the launching of his political party, Haasan went around Chennai city during the last two weeks seeking the blessings of veteran leaders like M Karunanidhi, CPI leader R Nallakannu and DMDK leader Vijayakanth.

He had also called on Rajnikanth who too is expected to launch a political party soon. Political commentators in Tamil Nadu are of the view that Kamal Haassan in all likely would forge an alliance with the DMK for the upcoming elections. “His stance against communalism, his passion for the Dravidian ideology all make Kamal Haasan and the DMK ideal coalition partners,” said N K Kalyanasundaram, Tamil Nadu’s political historian.

Haassan had called on leaders of all parties barring the AIADMK, the BJP and the PMK. “Why should I call on people who do not know my politics, principles or ideology? They have been claiming that the political party I am going to launch would make no impact in Tamil Nadu,” the actor told reporters when he was asked about his ignoring the AIADMK. About the BJP, Kamal Haassan had repeated many times that he would not have any kind of truck with a party which is communal. The PMK is another outfit which had been ignored by the star. Dr S Ramadoss, the party founder has made it known that Tamil Nadu could be saved from the present plight (corruption and nepotism) only by getting rid of the cinema culture from the State’s politics.

Anbumani Ramadoss, the Chief Ministerial candidate of the PMK too has asked the people to shun film actors from politics. Kamal Haassan would be ninth film star to launch a political party in Tamil Andu. It began in 1972 when M G Ramachandran, MGR to fans, who was expelled from the DMK by the Karunanidhi clan, launched the All India Anna DMK which captured power in the State within five years. Though Sivaji Ganesan, another super star of the MGR era, had launched Tamizhaka Munnetra Munnani in 1987, the party died a silent death within three years. He was followed by Bhagyaraj, S S Rajendran, T Rajender , Sarat Kumar and Seeman. But none could make any kind of impact in Tamil Nadu politics except Vijayakanth who launched the DMDK in 2005 and went on to poll 10 per cent of the popular votes in the 2009 Lok Sabha polls.

The DNDK forged an alliance with the AIADMK in the 2011 Assembly election and won 28 seats which saw Vijayakanth emerging as the Leader of the Opposition. But his party got disintegrated and in the 2016 assembly election even Vijayakanth was defeated. On Wednesday morning, Kamal Hassan would visit Rameswaram to offer prayers at the memorial of APJ Abdul Kalam, Former President of India. Since he is against the Hindutwa politics, the actor would had declared that he would not vist the Sree Ramaswamy Temple at Rameswaram. He would declare the name of his party and its manifesto later in the day at Madurai, also known as the Temple City of Tamil Nadu.

At the time of going to press, there are reports which state that second rung leaders of the Trinamool Congress, the DMK, the CPI(M) and Delhi Chief Minister Arvind Kejriwal would grace the occasion.
February 20, 2018
Unknown
News, regional