Home » international » News » India has nothing to worry about China-Bangla ties: Sheikh Hasina

India has nothing to worry about China-Bangla ties: Sheikh Hasina 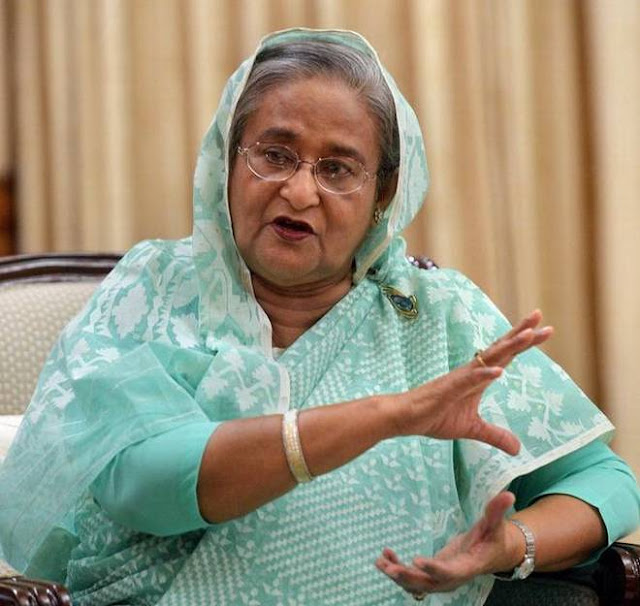 Dhaka (PTI): Bangladesh Prime Minister Sheikh Hasina has asked India not to worry about Dhaka’s growing ties with China, asserting that the cooperation with Beijing was meant only for the country’s development. Ms. Hasina said her government was only concerned about the development, and is ready to cooperate with any country that helps Bangladesh’s growth. “We want investment and cooperation from whoever offers it.

We want development of the country... We have to think about our people as they are the beneficiaries of the development,” Ms. Hasina on Tuesday told a delegation of visiting Indian journalists at her official residence. She said India, China, Japan and even the Middle Eastern countries were coming to Bangladesh for cooperation. “India has nothing to be worried about it,” Ms. Hasina said. “I will [rather] suggest India should have good relations with its neighbours, including Bangladesh, so this region could be developed further and we can show the world that we all work together,” she said. Ms. Hasina, 70, said Bangladesh and India shared “excellent” ties and the two countries have set an example of solving problems like maritime and boundary disputes.

“If there is any problem, we could solve it through discussions as we did it in the past. We want to build a peaceful South Asia,” Ms. Hasina said. She said that during her 1996-2001 tenure, the two countries had signed the Ganges water treaty while in her second term maritime and boundary issues were resolved. China has vowed to boost military-to-military relations with Bangladesh by stepping up defence ties, including broadening of personnel training and cooperation in equipment technology.
Earlier, China said it planned to provide Bangladesh with a whopping $9 billion low-interest loan to build six rail projects including one close to the Indian border. Ms. Hasina also sought India’s support in repatriation of over a million Rohingyas to Myanmar, fearing that their prolonged stay in Bangladesh could create security risks. “We want India to put pressure on Myanmar so they quickly take back their displaced people,” she said. Ms. Hasina directed the foreign office to hold a dialogue with five countries, including India, which have borders with Myanmar, hoping that the initiative will help in solving the Rohingya crisis.

“The monsoon is nearing and keeping the Rohingyas in this way [in makeshift camps] is very risky for Bangladesh as well as for them,” she said. The journalists from Kolkata and New Delhi are on a visit to Bangladesh to participate in a three-day Bangladesh-India media dialogue.
February 20, 2018
Unknown
international, News