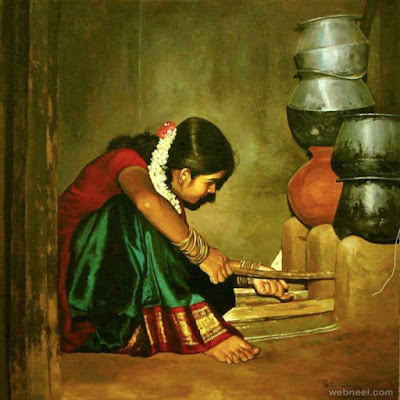 This time the monsoon was delay and was not enough to harvest the farm of fill up the big ponds the river Ghagra keep flowing neither Grandmother's tricks nor children's tricks of unclothing succeeded in the rain. Only one sound come from everywhere "all clouds gives water". On the request of children God gave the water but that too like the urine of God India. Rain water was not enough as the small ponds were also not filled up. Only mud and mud everywhere. Like the clouds were there lightning sounds were also heard it was appearing that it will rain heavily. After that we will go to our grand nana's place and enjoy the sweets and drinks over there. But the almighty's vision was something else. Now with the water of tube well we are sowing the crop of rice. If the crop will not grow as required then we will be of a very little value.

Suddenly Rasbatia went quiet and spanking on her forehead. She said after a long time men has come back and I was busy telling tales. OK leave it tell me how is the food cooked.

Oh shaking her head and covering her face with saree she turned. After several months seeing her husband back se was so glad that it was appearing like whole lot of love was clearly visible in her eyes.

In the village there were so many unemployed and very few were employed and of low income. Only some who have earned much education that person say bye to village. After becoming at order age Ram Avtar also did the same his mother wept and cried but of no use. Ram Avtar left for the city.

After his marriage Ram avtar went to city to earn rupees after one year he has come back to his village and when frisked by Rasbatia Ram Avtar says whenever there was a whisper then the veins of brain started humming and a felling of insecurity then only the remembrance of  village comes through. There is no any musical instrument in the city nor any folk songs being sung only the people are vanishing in the crowd and the customs & traditions are being blown out of air. Remixes are there in the city. In air conditioned chambers people sitting and giving the description of clouds and Baba Kalidas and Tulsidas singing Chumma-Chumma.

And talking in the same manner Ram Avtar went silent. Oh I am also talking meaningless. Tell me how are you and what's the news about village. Oh, don’t ask the news of the village here a canal was being dug up. In that case village head was murdered and on the other hand Satrohna………… saying this Rasbatia went numb. What happened to Satrohna. Ram Avtar spooked Rasbatia. Rasbatia replied. In this Dussehra Holidays his Chachi fixed his wedding with the daughter of teacher Trilochan of Badhaipurwa. Bedhuni only one week passed of the marriage that there was a call from army that in the KARGIL Pakistani soldiers have attacked. Chachi told him that Pakistani soldiers are very cruel beware of them.

Satrohna went back after seven days a letter came that he had reached safely and now he is being sent to KARGIL. Badhuni heaved a sign of relief and then started praying Goddesses. Here in the village rumours went around some say that Pakistani have captured KARGIL but some other say that Government is hiding the truth and Pakistani soldiers have entered too far. Some say that our country has suffered a huge loss. But some say that no it's not like this our army has driven them back.

On the day of Kalipuja Budhani cooked delicacies and served for her mother in law. After her mother in law had those delicious foods when she herself sat to have those delicacies she thought that her lips have dried up by the thirst and hunger. By the cold her body colour began to turn blue. Badhuni threw the bite on the floor she was going to eat.

Why are you doing like this asked her mother in law. Being a bahu of house you should not throw the bite on the floor. It is unfair Badhuni turned red faced. Again she tried to have one more bite from her plate. But same thing happened she felt tasteless and unable to chew but again she thought that same unusual could happen to her husband so she ate that bite but vomited. Then her mother in law did not forced her to eat. She began to think that now her tongue has lost the taste of delicious foods. As she had also lost the taste fifteen years back.

OK enough is enough now I can't hear Rasbatia. Only tell me where is Badhuni. He asked with heavy heart.

After the death of her husband people of the village started commenting they use to say that she is a witch as she has taken the life of her husband. She lived until her mother in law was alive. When her mother in law died she also had rat poison and ended her life. Saying the Rasbatia eyes were also filled with tears that hugging Ram Avtar. She said you will not go to city again leaving me.

Ram Avtar began to think about it that Rasbatia is right. Upto how much he will run in the city due to fear of his boss threats from moneylenders and  the grocers. Then he saw some ants climbing up the wall. He began to think that when these small creatures do not leave hope till their end. Then why should he leave his village from the problems. At last happy days will also come in my life and on that day I will blow the bugle.

He was lost in these thoughts then Rasbatia hooked him. Wake up its raining heavily get inside the house. I have cooked the pakories of besan and onion for you.