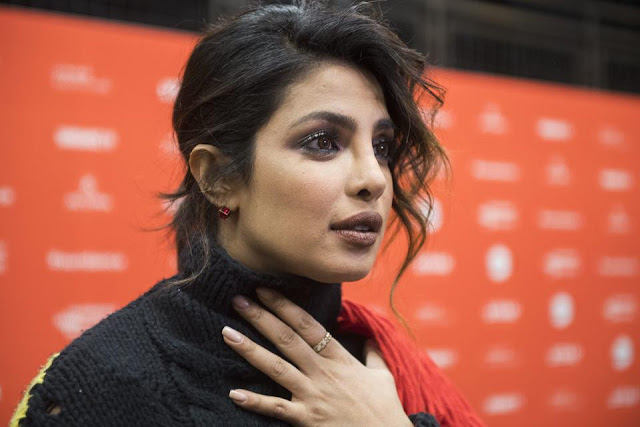 Priyanka Chopra speaks to reporters at the premiere of the film A Kid Like Jake at Eccles Theatre during the Sundance Film Festival. (Arthur Mola/Invision/AP)

A day after the opposition Congress legislators in the Assam legislative Assembly demanded removal of actor Priyanka Chopra as the brand ambassador of Assam tourism, State Tourism Minister Himanta Biswa Sarma came to her defence and said that a section of the Congress legislators are trying to get cheap publicity out of the issue.

Congress legislators including Nandita Das and Rupjyoti Kurmi recently raised objections during the ongoing session of the Assam legislative assembly to a photograph of the Bollywood star in ‘minimal clothes’ as featured in a calendar of the Assam Tourism Development Corporation (ATDC) and demanded that she be removed as the brand ambassador of Assam tourism. The Congress legislators also showed a copy of the ATDC calendar where Priyanka was seen wearing a frock and not the traditional dress of Assam - Mekhela chador.

“The government should preserve the respect of the Assamese society. Frock is not an Assamese attire and the calendar pictures were not sober at all. The government should have known how to preserve the prestige of the Assamese society, instead they could have used the traditional mekhela sador. This is the reason we have protested against the calendar,” Kurmi told the portal TIME8. Priyanka Chopra speaks to reporters at the premiere of the film A Kid Like Jake at Eccles Theatre during the Sundance Film Festival. (Arthur Mola/Invision/AP) “A section of Congress legislators in Assam are trying to get cheap publicity out of the issue.

When we receive felicitation in some stage do we go wearing dhoti, the traditional dress of Assam or wearing pants and shirts? If someone comes to Assam from abroad will he be felicitated after wearing dhoti?,” said Sarma while answering a journalist outside the House on Tuesday. Congress leader and Assam’s Leader of Opposition Debabrata Saikia said that it would have been better if the brand ambassador had worn Assam’s traditional dress during the photo-shoot for the calendar of ATDC. “I think that (wearing an Assamese traditional dress) would have been appropriate for the actor to promote the culture and tradition of Assam,” he said. Saikia, however, said that the government should rather concentrate on improving the tourism infrastructure in Assam rather than spending funds on appointing brand ambassadors.

“The tourism infrastructure has been improved in past several years but it needs to improve further and government should concentrate on that,” he added.
February 20, 2018
Unknown
Entertainment, News