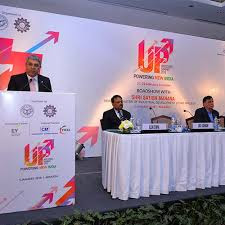 Lucknow (PNS): On the eve of the first ever ‘UP Investors’ Summit’, the Khadi and Village Industries Board and global e-commerce giant Amazon India signed a Memorandum of Understanding (MoU) on Tuesday to promote Khadi apparel manufactured in the State under the brand of ‘UP Khadi’ over its online marketplace.

As per the MOU, Team Amazon would educate and train khadi artisans to directly sell their products to online customers. The online portfolio would include products such as Khadi shirts, kurtas, dhotis, towels and gourmet food which have huge potential and demand in urban areas. The agreement was signed by Khadi Minister Satyadeo Pachauri and Director and General Manager of Amazon India, Gopal Pillai.

“We would deploy our team to train Khadi artisans associated with units that are onboard with us,” Pillai said. He claimed there was rising demand for khadi products globally and it was becoming the fabric of choice for the people, especially youth. Pillai further said,

“Since UP is famous for distinct traditional industries across its 75 districts, the company would be willing to consider other such products as well in the league of ‘UP Khadi’ if there was adequate demand apart from commensurate State Government push.”
February 20, 2018
Unknown
News, regional