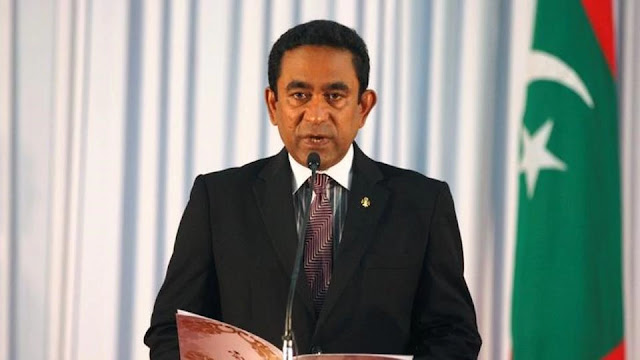 Colombo/Male (PTI): The Maldives’ Parliament on Tuesday extended the state of emergency by another 30 days, approving President Abdulla Yameen’s recommendation. Only 38 MPs were present for the vote, which took place hours before the state of emergency was due to expire, despite 43 lawmakers being needed for the vote to take place as required by the constitution, Maldives Independent news website reported. All 38 were from the ruling Progressive Party of Maldives and they all approved the extension, it said. The Opposition had boycotted the vote.

We are asking citizens, we are compelling them to let the state suspend and restrict their fundamental rights for more than a month. There is no other violation of the constitution that shines on this clearly,” said opposition MP Ibrahim Mohamed Solih. Eva Abdulla, another opposition lawmaker, accused the speaker of bypassing the constitution and said the state of emergency was illegal. Shahindha Ismail, executive director of the Maldives Democracy Network, said the ruling party has effectively and completely removed all democratic and lawful systems of governance in this country.

The controversial vote took place at the second extraordinary session in as many days. President Yameen declared the emergency on February 5 after the Supreme Court ordered the release of a group of Opposition leaders, who had been convicted in widely criticised trials. Among them was exiled ex-President Mohamed Nasheed. The court said his 2015 trial had been unconstitutional. Under the emergency law, Yameen had two Supreme Court judges arrested, accusing them of corruption. Later, the remaining three judges annulled the order to release Yameen’s opponents.

There has been international condemnation of the government’s moves, with the US and India expressing concern.
February 20, 2018
Unknown
international, News